Not too long ago I was involved in a two-car accident in which I rear-ended the driver in front of me. Thankfully, someone was watching out for us, and both myself and the other driver were able to walk away without any serious injuries. As the day went on, however, and especially the next day, I began to feel the uncomfortable achiness that was a result of whiplash.

Whiplash occurs, (more likely in women), when your head suddenly moves backward and then forward, as in the motion when one cracks a whip. In my case this occurred when I was hit in the face by my driver airbag. In this extreme jerking motion, the muscles of your neck are often not ready to respond and are pushed past their normal range of motion, putting strain on the muscles and ligaments.

According to my source, http://www.mayoclinic.org, most of the symptoms of this neck injury develop within 24 hours and can include neck pain and stiffness, headaches, dizziness, blurred vision, fatigue, difficulty concentrating, memory problems, ringing in the ears, sleep disturbances, and irritability. I experienced many of these symptoms myself. However what they don’t mention is the frustrating and confusing disconnect in your body that you can feel after such an incident.

The first couple of days I did everything I knew: ice and some over-the-counter pain relievers/ anti-inflammatorys for the inevitable inflammation, heat on the tight muscles in my back and chest, and of course massage. I felt generally better, but it wasn’t until almost a month later when I was in NYC for one of my 10-day Feldenkrais Practitioner Training Program segments that I realized the extent of the effects that this accident had had on my nervous system. I felt lost in my body, not sure how my head was connected to the rest of me! I could say this because prior to my accident, (through my 3 years of Feldenkrais training up to this point), I had felt that connectivity in my body before and had experienced my body as a whole in motion. I had a point of comparison and I knew I was not well yet.

As I experienced, the trauma of the quick whipping of the neck caused my body to try to immobilize the head to prevent further injury. This immobilization effort in the body can persist far after the danger has gone, and can become habituated in the body as a means to protect, even if it is no longer needed. In order to reintegrate the head as a moving part of the body, I had to become aware of this, which was frustrating to say the least. It wasn’t until the last couple of days of my 10-day intensive training that I felt I was finally on my way out of my whiplash mess. 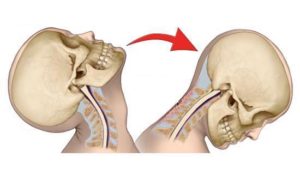 According to my source, http://www.mayoclinic.org, “Most people who experience whiplash will recover in the first two to three months. Fewer people may continue to have pain for several months — possibly up to two years — after the injury occurred. In some people, this chronic pain can be traced to damage in the joints, disks and ligaments of the neck. But in many cases, no abnormality can be found to explain this persistent neck pain.”

‘No Abnormality Can Be Found’.. Isn’t this amazing? The body becomes so set on protecting the neck from further injury that it can habituate an organization in the body inhibiting movement and thus causing chronic pain for the person. This prolonged pain can lead some to try prescription painkillers, muscle relaxants and even injections to try to subside the pain, but the reality is that the pain is there because the nervous system is telling it it needs to be. It is my belief and personal experience that in order to really overcome this you must go to the nervous system. In becoming aware of limitations, your body can better discern what is helpful and what may not be ideal in a situation, or as Moshe Feldenkrais states it so beautifully: ‘When you know what you are doing, you can do what you want.’

“Habit Formation is a terrible nuisance when not in the context in which they were formed.” -Moshe Feldenkrais, PhD