The Feldenkrais Method® is not easy to explain, but rather is much easier to understand through experience…  But here goes! 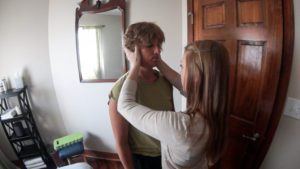 This is the theory behind the Feldenkrais Method® and my interpretation of it.  Read it slowly, read it again, take it all in…enjoy!

Over the years, through our life experiences, injuries, social interactions and our own efforts, we have all come to habituate certain actions.  We may carry one shoulder higher than the other because we carry a heavy purse, we may always stand with our weight over one leg because we once sprained an ankle, or we may strive to stand with our stomach pulled in and our chest pushed out because we like the way we look.  Whatever it is, when we habituate an action, the neuromuscular pattern for that action is stimulated again and again, strengthening  its pathway in our brains and rendering other pathway options for movement less important.  When the pathway is strengthened the action becomes easier to return to and the cycle of habituation continues even if the action is not ideal for all situations, it becomes our go-to.

But how can we reach out for something if our shoulder is depressed?  How can we step with a foot if we are standing on it?  How can we stand up straight if our stomach is pulled in and our abs are engaged for bending?  These basic and necessary actions would all require some preliminary adjustment of the body in order to even begin to initiate.  The body may even work twice as hard in the other direction in order to overcome the habituated work rather than letting it go.  This is the formula for pain and makes for longer execution of one’s intentions – which in human history is not conducive to survival.   Although these habits may have arisen from purely accidental circumstances, from times of physical or mental trauma in our lives or from developmental stages that have since past, our body continues to use them as our default settings.

The problem with this habituation cycle is that the body is training itself to only be available for certain actions.  The human nervous system is adaptive and intelligent, and when it is repeatedly asked to perform the same action, latent tone is left behind in the participatory muscles to prepare the body to quickly come into those habituated formations again.  When we try to perform any other opposing action, that tone still exists forcing the acting muscles to work even harder in order to achieve motion.  This is when people find themselves with pain, with decreased range of motion and a great sense of effort when trying to accomplish tasks.  Their actions are not matching their intentions and their body is working entirely too hard to quite literally fight against itself.  There is a direct relationship between sensation of weight and the unnecessary effort that an individual is exerting.

So how do we achieve what we want to with ease? How do we become free from our compulsions?  First we must become aware of them.  Then, we can introduce other, perhaps more useful options that allow our brain to discriminate in an organic way what the most effective movement pattern for that exact moment will be.  This was Feldenkrais’ thinking when he applied his method to both his Awareness Through Movement lessons and his Functional Integration practice.  Feldenkrais recognized the brain and nervous system as the core of movement.  The brain was developed by and through and for movement.  He hypothesized that many of these more useful patterns for movement had potentially already been visited somewhere along the developmental path at a time before habituated action had such a hold on the individual.  He believed that the variety of movement pathways that would prove to be useful already existed deep within us and that the reintroduction of these potentials for movement were the guide to bring each individual into their most effective functioning selves.

As tiny toddlers we learn that certain ways we have tried to walk don’t work for us because we fall down.  We get up, try again, and eventually come to an organization where we no longer fall.  But is this simply fall-free walking the best way for us? Is it the most efficient way our body can move?  Or is it just “good enough”?  Our walking gets us from point A to point B without falling and it is fine.  We feel that we have ‘achieved’ walking and move on to the next task.

However, the many falls were not failures, in fact they were essential to our learning to walk at all.  Each fall provided an opportunity for variation to be experienced by our nervous system which added to the arsenal of movement patterns from which it could draw on in situations further on down the road.  It set the groundwork for successive and more complex movements like running and jumping.  It was vital to our development.  How would we ever learn to get up if we never fell down to begin with?  We can walk without falling and we have learned enough to function, but our abilities to function with a greater range of ease, skill and total body cooperation may remain to be developed.  Our experience drives our self-organization, and without the experience of efficient movement, how would our nervous systems know what efficient movement is.

As adults, in order to continue to learn and improve when we no longer have the loud feedback of our falls, we must become quiet.  We must turn our attention inward, listen, observe, and withhold judgment.  Before you can know what you want to do and best serve your intention, you must become aware of what you are already doing and what your intention is.

Moshe Feldenkrais formulated hundreds of lessons, using a safe environment and gravity as intentional tools, in which the participant could explore and identify any tendencies in their motion, support and investigate the influences of these tendencies on their functioning, and introduce alternatives which could be learned and integrated in the individual and be available for organic selection.  These alternatives are explored as of a functional movement (rolling, twisting, etc.) and therefore the nervous system sees a reason to integrate them.  Moshe believed that you could not eliminate a motion without providing a better alternative.  So, in order to conquer one’s compulsions you must involve those compulsive parts in something more useful for the individual.  Because pain is not so much in the tissue itself but in the area of the motor cortex of the brain which causes the movement to be inhibited, when a painful part is incorporated in a different way into a pleasurable movement, the brain will likely choose that new movement the next time the part needs to move.  Increased choice will equal increased freedom from compulsion.

When your nervous system experiences an easier, more pleasurable way to achieve a familiar action, the improvement is almost automatic.  Not as a function of trying or using effort to do so, but as a function of survival.  (The less energy put into figuring out how to run away from a predator, the more energy can be used to run!).

Experience the amazing potential of your amazing body and explore how you can make “the impossible possible, the possible easy and the easy elegant” with the Feldenkrais Method®!

Have a one-on-one Functional Integration® Session with Evan at Bodywork Professionals in Latham or Saratoga Springs.