My most recent trip to Greece had nothing to do with continuing my work. This was a an adventure of the heart, motivated by love and made real by the union of two peoples family and friends and my own next steps.

My friend was getting married to a lovely Grecian woman and made the mistake of inviting tons of American friends who all showed up. The result was a legitimate Big Fat Greek Wedding. Three days of dancing, partying and celebrating our friends in love.

I have been with my lady for several years now and we’ve made it through highs and lows. I realized that while there are many people out there I could love I could make a life with this one. 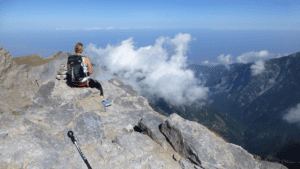 As far as I was concerned there was only one place in Greece I could propose this momentous decision to, the seat of the gods…. the top of Mt. Olympus.

The height and physicality of it asked for courage and strength. It was longer and harder than anything my lady had attempted before and there was more than one time I thought we might not make it. The last portion on the peak is a wide open scramble with loose rocks and steep edges. At about 10,000 feet the air is noticeably thinner than it is at sea level. We didn’t notice the cardiovascular effects as much as the mental strain and both felt emotionally unhinged as I’d go from giddy to gravely concerned to exhausted in a matter of moments.

Finally, we rounded the last corner and saw our peak. It was just a small stack of rocks but we knew it was the end of the road. The view was incredible as the valley offers a clear shot to the ocean some miles below. We were above and within the clouds and participating in the moving weather gives one a sense of being someplace sacred and important.

This is the legendary peak of the gods. Athena and Zeus would have been an ancient religion when Jesus walked the earth. This place was forbidden for mortals and I felt a connection with the mortals who needed to talk to the gods who would have disobeyed and made the treck anyway.

As we took it in and sat on a rock I knew the time was right to offer my love a rock of my own. I had not prepared anything formally but said that this mountain, like life was hard. And we did it together. That together would could overcome anything and that this was just the beginning of a larger adventure, an adventure we could go on side by side.

It seemed to work and I got some affirmative sounds mingled with nodding and a kiss. We took in the view and absorbed the experience before we started back down the mountain hand in hand. We left the mountain with a different view, a different perspective than when we started, and a new world open in front of us.

This whole trip would be about coming together. My friends who were married in Greece, me and my new fiance, and seeing the green shoots of a new relationship start from the ashes of two broken ones. Adventures of the heart require faith in someone else and that could be the biggest adventure of all.