The name Bodywork Professionals is based on the Fibonacci sequence of numbers, also called the Golden Ration or Phi. the sequence 1,1,2,3,5,8,13 is simple the next integer is the sum of the two before it. Bodywork (8) and Professionals (13) is a reflection of that. I wanted to use bodywork to break away from the notion of massage being a luxury and I felt like Bodywork more acutely described the work we’d be doing.

This sign was the second incarnation of what I had been thinking. I knew I wanted copper and painted a copper color on paper and cut the logo out to make a light box. It totally sucked and I began to realize owning a business was not only going to be harder than I thought, but I was in this because I loved it and everything has to be as awesome as I can make it. That would be a model for me. Do the things the way you like them done because it’s a direct reflection of what’s in you. The visual and tactile part of Bodyworks is something of a subtle game for me. How can I reflect what I think are cool in my business.

Anyway, my friend Brett Maura was working at a sign company and had the ability to help me out with the one you see below. It’s burned copper that the oil from our hands made an interesting patina on. I didn’t know at the time but it would influence the colors and decor of the whole office. I’ll never know why I wore that shirt on picture day. 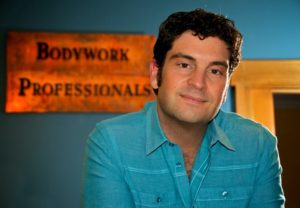 Our logo comes from a piece of furniture in my treatment room. My great Aunt Emmy was an orphan teacher in Troy. To make some extra cash she took laundry and boarders into the house she shared with several other family members (including my beloved grandmother who has told me this story). It’s called a Soap Top desk because when you saved enough laundry soap tops you could get one for free. It took years to save for it.

The desk has been with my most of my life. My father and I (my fathers lesson to me really) was to start a small business when I was 12. I sold smoke bombs, rug beaters and tie dyed t-shirts. Leatherstocking Trade Co. was a hit, and there were times I took $300 or more home from a weekend at the flea market where we sold our items. Leatherstocking Trade Co. was based out of that desk. I remember writing my first check, keeping the books and tracking inventory from while seated there.

The desk represent entrepreneurship for me. The logo is a translation from the carved wood it is adorned with.

Ten years and I feel like I’m still that kid, excited about what I do and planning all kinds of new things for the future.