We’ve been open in Saratoga for a couple years now and just over 4 months in our new location. I was prepared for a challenge, and running into road blocks and that is of course exactly what happened. The fact is, life is hard. It’s impossible to plan for everything and learning to roll with the punches is a lesson worth learning. 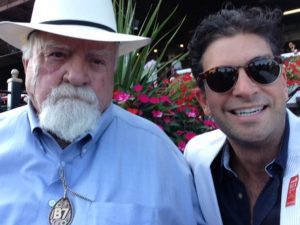 So there I am at the track, and I hear the announcer say that Wilfred Brimley’s horse won and he was in the winners circle. I was like “Wilfred Brimley! I gotta go say hi!” Before I knew it I was getting a selfie with the old curmudgeon himself.

Meeting Brimley I realized he isn’t really an actor. He is just what he is and that deep genuine honesty translates into good acting albeit with a little sand under his saddle. He doesn’t tolerate and crap (me and my cell phone were barely tolerated) but there is a warmth under it all.

Wilfred comes from a time TV and movies that came with a story and a message like his recurring role on “The Waltons”. Shot straight, work hard and keep your head up. There is a challenge in every episode (life and TV) but with a good heart and a quick mind we can overcome anything and live happily ever after.