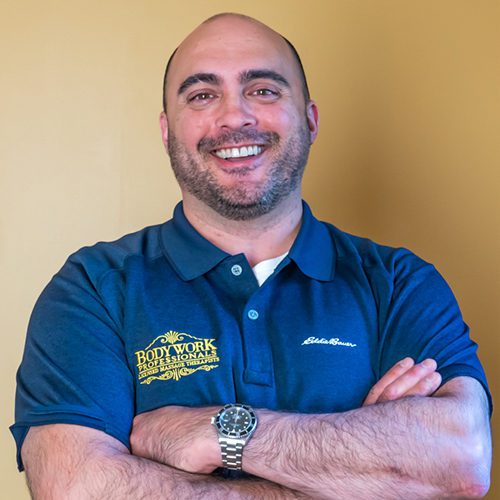 Andrew began his professional career as a Mechanical Engineer with the United States Navy onboard a submarine stationed in Pearl Harbor. During his last few years on active duty Andrew developed a daily yoga practice and in his search to find easier movement in his own body he was led to the world of bodywork. Andrew found Nick, the proprietor of Bodywork Professionals, and by the end of their first session together, Andrew knew that he wanted to be a structural integrator too. Andrew did his Structural Integration training with Tom Myers of Anatomy Trains Structural Integration (ATSI)  (www.anatomytrains.com), formerly known as Kinesis Myofascial Integration (KMI), and in 2015 became a Board Certified Structural Integrator (BCSI). Since then Andrew has continued his studies in Advanced Structural Integration attending various courses. He has been continuing his education with Tom Myers, and Andrew has also studied with one of Ida Rolf’s original students, Neal Powers. In addition to furthering his studies inside of the field of Structural Integration, Andrew has most recently been studying and practicing craniosacral therapy through the Upledger Institute.

People often comment, “Engineering and structural integration are two totally different worlds. That seems like a huge shift moving from one to the other.” In Andrew’s mind, the two worlds are the same; the only change is the medium. Instead of analyzing stress and strain in the structure of a building or a component, Andrew is now looking at the structure of an individual person. Where is there too much stress? Where is there too much strain? Where and how can Andrew work to bring more ease and balance into this person’s entire structure? The result often looks and feels like a more balanced individual who moves with more grace.

Andrew makes the process of Structural Integration fun and engaging, cultivating the individual’s own curiosity about their body and the multitude of ways in which it can move and function. In addition to relieving pain and finding ease both in standing and moving, Andrew’s clients gain the knowledge and the confidence to find their own answers. Andrew believes that life is much easier when it’s much easier to move.